It's going to be a short update today, but that shouldn't make it any less powerful. Earlier this week, I put through a small change... wherever you buy ebooks, I have lowered the price of Hunter's Gambit down to $2.99 USD. So, if you were waiting until the ebook was cheaper to grab a copy, now is your time! 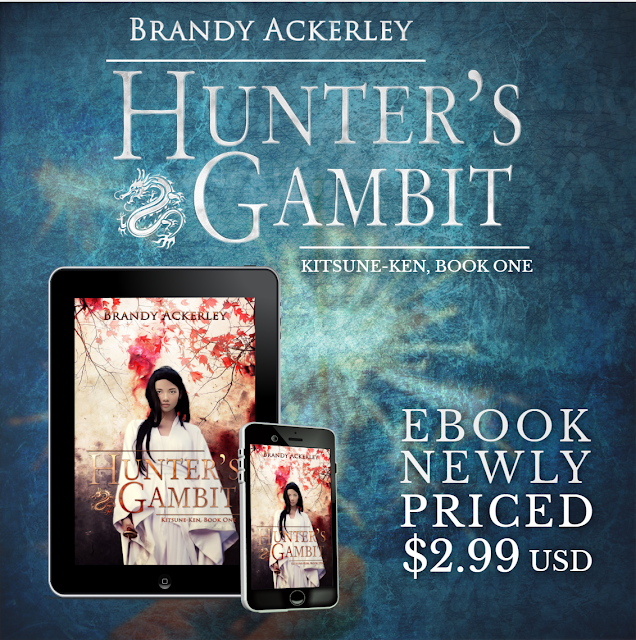 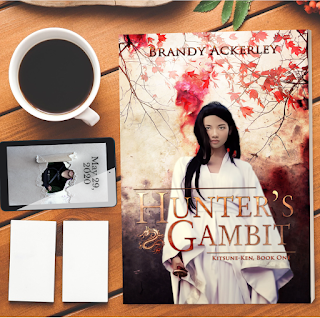 Posted by Brandy Ackerley at 2:57 AM No comments: Links to this post

This is a quick update! I found out earlier today that a friend of mine has released a book of poetry, and for this weekend only is giving it away for free*! If you're a fan of poetry, check it out and get yourself a copy! Oh, and for those of you who read in KU, its available on there as well! 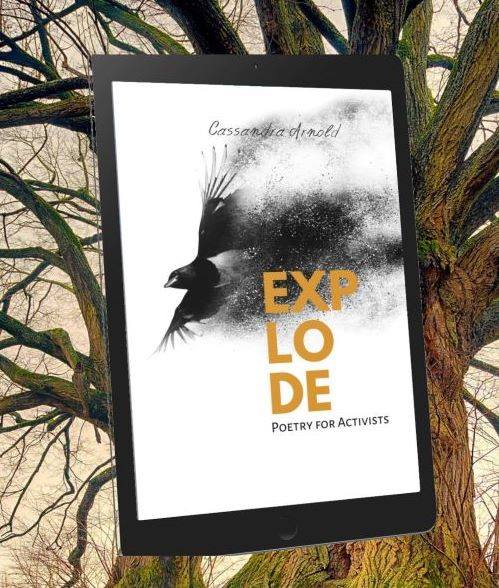 *Free in the US, Canada and UK

Posted by Brandy Ackerley at 6:47 PM No comments: Links to this post

Its Been a Hell of a Good Week!

Its been a busy week, despite nothing really changing. I have a novella I'm trying to edit so I can send it out to a reader, I started editing another book, and I'm still trying to finish writing book 4. In addition to that, I've been trying to get a whole slew of things finished, both to do with my writing and not. In addition to that, I've been waiting on another potential editing client (and while they may take up some of my time, its wonderful to be working, helping out my fellow authors.

Despite everything that's on my plate, its been a hell of a good week. I wish I'd gotten more done, of course; having multiple projects on the go offers some freedom if you're having trouble finishing a task, but it also put tons of extra tasks on the docket. That said, I'm super glad to have had Black Desert Online to play when I need an hour away from a task. Its relaxing and helps me to feel all the more eager to get back to my work.

Unfortunately, this leads to a very quiet week for me to talk about... That said, keep an eye out. I should have a few awesome things going up over the next week! I've been working super hard behind the scenes and things are finally falling into place.

Keep your eyes out for those updates and I promise you won't be let down.


Posted by Brandy Ackerley at 1:06 AM No comments: Links to this post

Hunter's Gambit- A Year in Review

Its been a little over a year and since all is quiet on the noveling front, I thought I'd take some time to look back at what's happened for Hunter's Gambit in the last year. 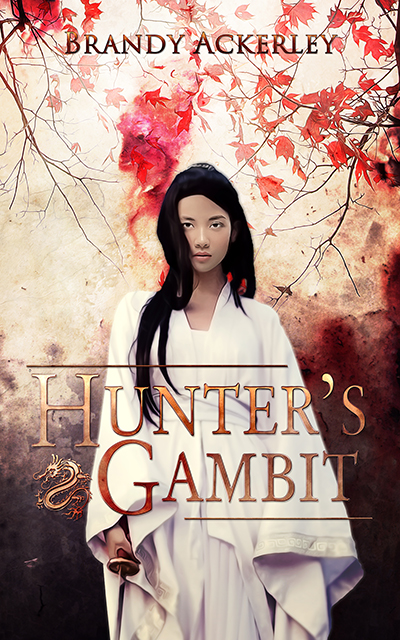 Hunter's Gambit was released a little over a year ago. It didn't get a lot of fanfare, but it did get out there. I had 3 signings, two of which were at local bookstores and one at When Words Collide. I wasn't surprised that the convention was the best for recognition over the year... I gave presentations there and did a lot of networking, with both fans and other authors. What did astound me was that people were searching for me out of all the amazing authors there. I was honored beyond words. 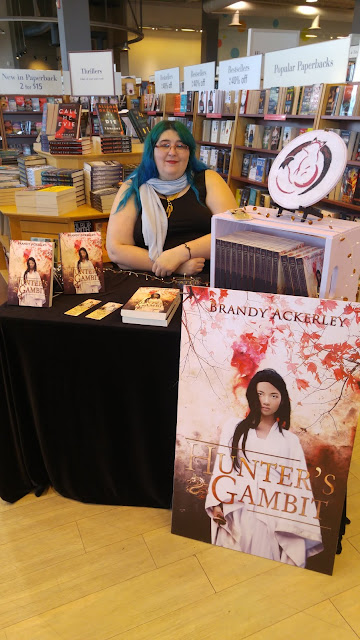 Aside from that, I've gotten 5 reviews (which doesn't sound like many but pleases me since its known that only 1% of people tend to leave reviews at all). On Goodreads, my star rating is 4.40 out of 5 and on Amazon, its 5 out of 5 (though I only have 2 ratings right now, one on .com and one on .ca). I've also found my novel in bookstores worldwide. This probably means that one day I'll have to think about getting it translated, though that will be for later. 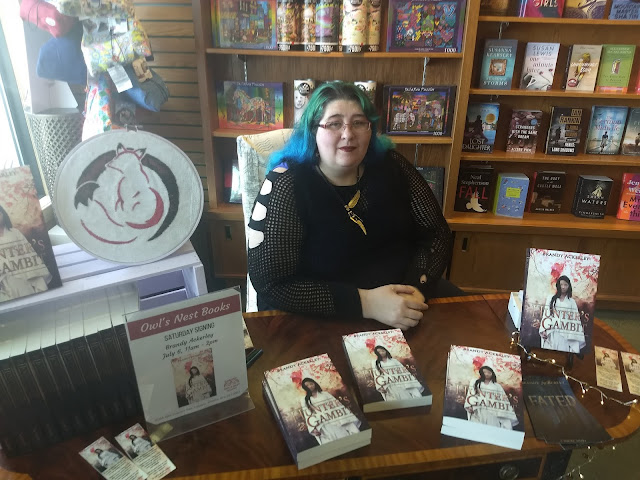 So, where is this series going? Well, first off, this is a series, not a trilogy. I'm getting near the end of the rough draft for book 4 and have a lot more planned out for these characters. I'm expecting somewhere between 8-12 books, but I couldn't tell you for certain yet. Just know that I'm young and in it for the long haul. I'd also like to get an audiobook done for it. Let me know if its something you'd be interested in! 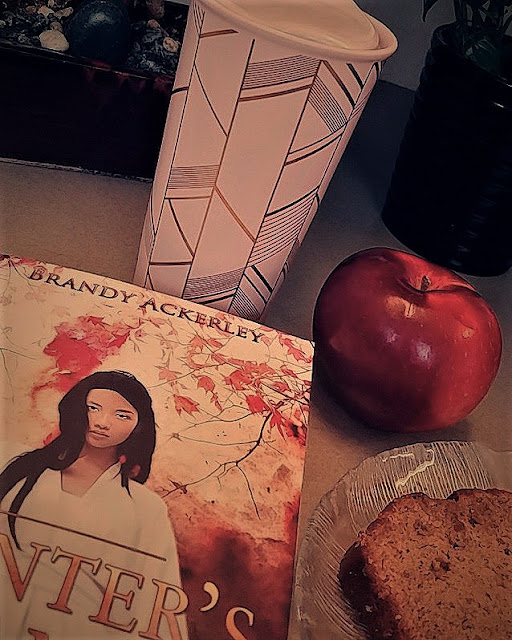 What were your favorite scenes in Hunter's Gambit? What about your favorite characters?
Posted by Brandy Ackerley at 12:01 AM No comments: Links to this post

All Quiet... on just about every front

It's been a great week. Even with the weather bringing more migraines, my way. Why? Well, my second editing job came in and I got an inquiry from a third person. If it keeps going like this, I'm going to have to rearrange my working schedule. Which, honestly, is a great reason to make a change. Also, working on development edits like this feels very natural. I wouldn't mind taking a course to brush up on my other grammar so I could offer line edits as well. It's something that I'm going to be keeping in mind as I move forward. It would be nice to keep working from home.

Other than that, I have been working on my writing. I am about 2 chapters further on book four than I was before and I'm nearing the end. Maybe 10k more and it should be done. I haven't gotten my novel back from my editor yet, but I should have it by the weekend. After that, I'll be putting in my order for my cover. Of course, that means that I've been working on my back cover copy. This is literally my least favorite part of writing. Its all technical writing and it uses a different set of skills than writing a novel does. I have gone over this thing nearly 3 dozen times, playing with word choice here and there, tweaking and tweaking. I've got something I like... But I know I'm still going to have to go over it a few more times before it's finished.

In slightly more global news, some parts of Canada are looking to opening up again. This would be good news for most people as life could return to normal. Alberta isn't one of them yet, but we are keeping ourselves inside and safe, so hopefully, it will be soon. I hope all of you have more freedom coming to your areas soon as well.

That's it for me today. Hopefully, I'll have good news with my update next week.
Posted by Brandy Ackerley at 2:37 AM No comments: Links to this post

I received my novel back from the editor! She loved the changes, said that I managed to fix 99% of her originals issues with it. I was able to fix those in under a day and have already returned them to her for a final grammar pass. So, this is it, guys. I'm waiting on payday to order my cover, but that is the last thing big thing that I need to do. I have been working on the back cover copy so as soon as we have the cash I can send in my request. Hopefully, it won't take too long and I'll be able to do a cover reveal in May.

I am stupidly excited about it.

I still have work to do for its release of course. Arranging cover reveals on other sites and blogs, putting the book up for pre-order on Amazon and the rest. Getting the novel up on Goodreads, ordering the print copies... all of that fun stuff.

It's going to be awesome.

In less stellar news, due to Corvid-19, our local government has finally put official restrictions in place for the summer. No groups of more than 15 may congregate for any event. This means that for the first time in literally over a century, we won't be able to celebrate the Calgary Stampede. It also means that our writer's convention most likely won't be going ahead. Or, at least, won't be going ahead as scheduled. We've been told to expect an email later today on how they expect to proceed. I'll keep you guys updated on what that means as well. I am disappointed though. I was so excited, finally knowing that I was going to be able to share a new novel with all of the readers there.

In a final bit of whimsy, I'll let you know that I started playing Black Desert Online this week as well. While I will never be a hardcore gamer, I thought I would let you guys know that I am finding horse wrangling most enjoyable in it. Here is my character riding her two horses. The brown one is Alenos (a tier 1 stallion, the lowest tier and my first catch) and the grey is Dapple (a tier 3 stallion). 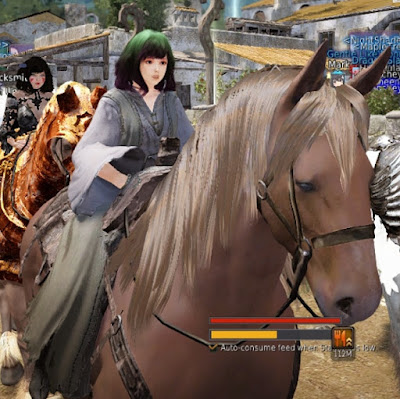 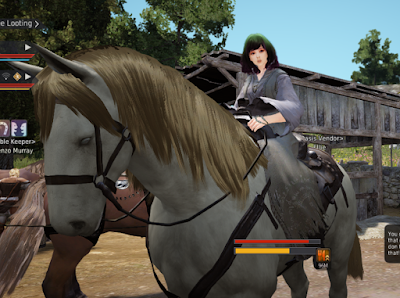 I'll end this post off with the hope that you guys are all staying safe out there. And let me know if any of you are playing Black Desert. I'm still hanging out in Valia mastering my animal training skills... let me know if you play and what you think I need to go and see out in the big wide world if you do? 😊
Posted by Brandy Ackerley at 2:49 AM No comments: Links to this post

Its been a heck of a week. My headaches happen when the temperature/pressure can't decide where it wants to sit. That means that in summer and winter, I may have a bad migraine or a bad day, but in the other two seasons, I'll get weeks when I have headaches every day and migraines on worse days. This week was one of those. Still, I got my editing finished and will be jumping back into writing again, either tonight or tomorrow.

Despite having one of those weeks, head-wise, I had a great time though. The most interesting bit of news is that this year at WWC, I am going to be on at least one panel, which is awesome. I'm gunning for three, but I haven't heard on the other two yet. Part of the delay is that we're just not sure if it's still happening. But the most exciting news is that I am going to have a workshop all my own that I'll be giving on being an author/artist with aphantasia. The main difference between a workshop and a panel is that a workshop is just me giving the talk. It's going to be my first one so I'm stupidly excited and really hoping it still happens this year.

The only other bit of news I have is really no news. I haven't heard back from my editor yet. I'm not worried and I've been keeping myself busy trying to finish book 4. Don't worry if I don't get book 2 back immediately. As soon as I finish book 4, if two hasn't arrived, I'll be picking up book 3 to start editing it, so I still have tons of work to do.

And that's where I've been all week. Hopefully, I'll be able to report back that my headaches have disappeared with warmer climes next week and book 4 rough draft done, if not book 2 in my hot little hands. Either way, you'll be the first to know!
Posted by Brandy Ackerley at 10:10 PM No comments: Links to this post

Brandy Ackerley
Brandy Ackerley is a creator of worlds with words. While primarily a fantasy writer of novel-length fiction, she also enjoys writing short stories and novelettes in a variety of genres. Hunter’s Gambit is her first published novel. She adores anime, tabletop RPG’s and finding out more about mythology and culture worldwide. Brandy lives in Calgary, Alberta with her husband, both of whom are owned by their cat.